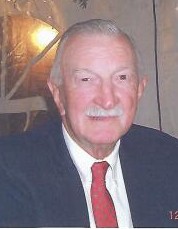 Ed was born in Hamtramck, Michigan on July 13, 1929. He grew up on Detroit’s west side. He was a graduate of Leslie Grade School, McKenzie High School, and Michigan State College.

His hard-working parents, Polish immigrants Mary (Wojtowicz) and John Labuz, instilled in him a love for their adopted country and a strong work ethic. As a young man, Ed delivered newspapers, took on odd jobs at the local pharmacy, stacked bottles at the Coca-Cola plant and, to the delight of kids in the surrounding neighborhoods, opened fire hydrants on hot summer days. Prior to attending Michigan State College (it became a University and joined the Big Ten Conference while he was enrolled), he worked one year at Ford Motor Company and at both Ford and Packard during the ensuing summers.

While attending State, he joined Lambda Chi Alpha Fraternity, making many life-long friends. Male students were required to participate in ROTC for two years, but Ed chose to complete the four-year course.

Graduating from State in 1953 as a Second Lieutenant, he headed to Japan to await assignment to Korea. That conflict ended before Ed was deployed. Military life agreed with him, and he enjoyed a 35-year stint with the Army Reserves, retiring as a Lieutenant Colonel.

After leaving active military duty, Ed worked at Liberty Tool and Engineering, then enrolled at the University of Detroit to earn a degree in Education. It was while teaching in Southfield, MI in 1960 that he met his future wife, Elaine Gustafson. Ed and Elaine would have celebrated their 59th wedding anniversary on July 1, 2020.

Encouraged by his good friend, Bob Hunt, Ed accepted a position in the Chicago Tribune's advertising department. With their young son Jeff, Ed and Elaine left Birmingham, MI and settled in Clarendon Hills, IL. They soon welcomed a daughter, Lisa.

After retiring from the Trib in 1991, Ed became a Snowbird. Homes in “Up North” MI and Vero Beach, FL provided periods of relaxation, golf, and good times with family and friends.

Ed’s spirit will remain with the people who have known him and loved him: His wife Elaine, son Jeff and wife Jodi, daughter Lisa and husband Chris; his two best friends - sister Janina and brother-in-law Olaf Kroneman; his beautiful and loving granddaughters Emily and Nora; and his nieces, nephews, and countless friends.

May you go through life as Ed did with a smile, a tender spirit, and as a loyal SPARTAN fan!

Private family services will be held.

In lieu of flowers, memorials may be made to the CLYFF Youth Center at the First Congregational Church, PO BOX 326, Central Lake, MI.

Arrangements have been handled by the Central Lake Chapel of Mortensen Funeral Homes. Please sign his online guestbook www.mortensenfuneralhomes.com.

To order memorial trees or send flowers to the family in memory of Edwin Labuz, please visit our flower store.
Send a Sympathy Card