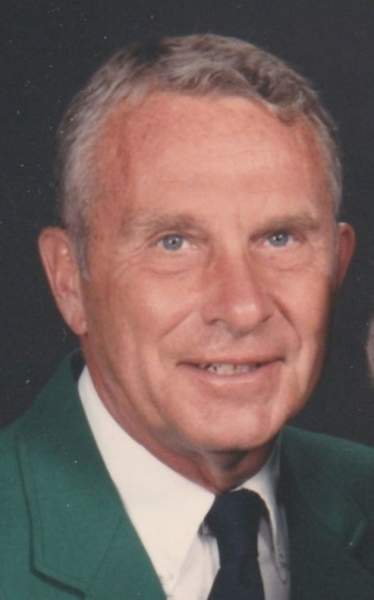 Edward Bender Pepke, 96 years of age, passed away on February 17, 2022 in Westerville, Ohio from natural causes. Ed was born December 5, 1925 in Detroit, Michigan to Ruben Walter Pepke and Hilda Christina Margarete (Bender) Pepke. He had one sister, Elizabeth. He graduated from Grosse Ile High School and earned a Bachelor of Science in electrical engineering at Michigan State College in East Lansing, Michigan. He went to college on the GI Bill following an honorable discharge in 1946 from the U.S. Navy.

Ed married June Kathryn King in 1950 who predeceased him in 1975. Living in Dearborn, Michigan, they had two children, Edward King Pepke (Joan) and Kathryn King Pepke who survive him. In 1977, he married Marcia Wolfe Richards. She and her four children – William (Martha), Matthew (Paula), Salesa, and Benjamin Richards – survive him, as do 8 grandchildren.

Ed worked his entire career for Honeywell. He started as an electrical engineer and then moved up to sales in Detroit. He advanced to branch manager in Columbus, Ohio in 1967. He retired in 1980 at age 55.

From Columbus he and Marcia moved to Central Lake, Michigan and lived on Torch Lake. In 2000 they built a new home in Ithaca, NY where they lived for 10 years. They moved back to Ohio and lived in Feridean Commons and then Danbury Senior Living in Westerville.

Ed was civic-minded and contributed to his communities. He was an active member of the Dearborn Congregational Church, the United Methodist Church in Ithaca and the First Congregational Church in Central Lake. After retirement he tutored mathematics and developed woodworking projects for school children. Like his father, he was a Shriner in the Masonic Fraternity. He was an avid woodworker and left beautiful heirlooms. He enjoyed helping family and friends with DIY projects. For a time he worked with neighbors to build and set-up flag poles, joking that he was in the erection business! Ed was thoughtful, quiet and reserved, but clearly possessed a wonderful sense of humor.

He loved the outdoors: canoeing, camping and hiking. He sailed on Torch Lake, the Great Lakes and the Caribbean. He loved to travel and covered the United States and Canada. He was a Boy Scout and later a Scoutmaster in Dearborn and then an Explorer troop leader in Upper Arlington, Ohio. He was an avid reader and learner and participated in elder hostels with Marcia.

Ed was a devoted husband and father who was loved by his family and friends. His family will commemorate his life in a private ceremony. His remains will be laid to rest in Lakeview Cemetery, Eastport, Michigan.

To order memorial trees or send flowers to the family in memory of Edward Bender Pepke, please visit our flower store.