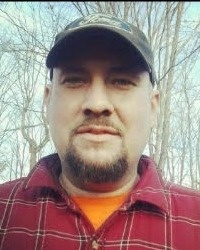 Edward LeRoy “Eddie” Wilson III, 38 of Mancelona and formerly of Central Lake, took his final ride home on September 29, 2022 after being involved in a motorcycle accident.

Eddie was born March 27, 1984 in Traverse City, the son of Edward Jr and Darline (Potter) Wilson and graduated from Central Lake High School.  He enjoyed riding and working on things that went fast including motorcycles, snowmobiles, and 4 wheelers.  Eddie was a hard worker and worked at East Jordan Iron Works for many years.

A visitation will be held Tuesday, October 4th from 12 Noon to 2 p.m. and 6 to 8 p.m. at the Central Lake Chapel of Mortensen Funeral Homes.  No formal service will be held.  Interment will take place in Southern Cemetery on his family plot.

To order memorial trees or send flowers to the family in memory of Edward "Eddie" L. Wilson III, please visit our flower store.