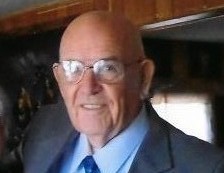 Earl was an outdoor enthusiast!  He especially enjoyed hunting and fishing.  He also enjoyed racing all kinds of machines and could fix anything with his hands.

A Memorial Service will be held Saturday, January 18th at 3 p.m. at the Hastings Chapel of Mortensen Funeral Homes with Rev. Celia Hastings officiating.  The family will receive friends from 2 p.m. until the time of service.

To order memorial trees or send flowers to the family in memory of Earl Reibel, please visit our flower store.
Send a Sympathy Card