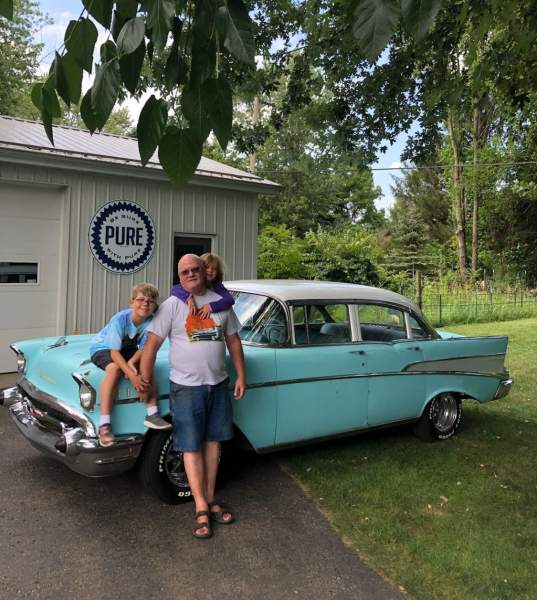 David K. Sumner, 60 of Breedsville, died January 18, 2022 at Bronson Methodist Hospital in Kalamazoo. He was born July 6, 1961 in South Haven, the son of Roy and Marilyn (Burlingham) Sumner.

Dave graduated from Bangor High School and worked over 40 years at the Perrigo Company. He finished the last few years of his career working locally at Bangor Plastics before an early semi-retirement and self-employment doing small engine repairs.

Family was first in Dave’s life and he always loved making home movies capturing memories of his two daughters. Playing with his grandkids, working on his 1957 Chevy, and golfing with his wife were favorite hobbies in his later years. He will be remembered by many as the one to go to for a listening ear, a helping hand, and a warm smile.

On July 31, 1983 he married Trudy Marie Mortensen who survives. Also surviving are his daughter Steena Sumner of Charlotte and grandchildren GloryAnne and Viggo Brown and daughter Kelsey Sumner of South Haven, his parents Roy and Marilyn Sumner of Lawton, brother Dean Sumner and his wife Linda Sumner of Paw Paw, sister Dee Polomcak and her husband Wayne Polomcak of Paw Paw, sister Deb Larson and her husband Phil Larson of Muskegon, sister in law Cherri Corning and husband Mike Corning of Kalamazoo, brother in law Gary Mortensen and his wife Susan Mortensen of Central Lake, brother in law Mark Mortensen and his wife Dotti Mortensen of Breedsville, and many nieces and nephews.  He was preceded in death by his brother Dale Sumner, in laws Lillian and Bruce Mortensen and brother-in-law Stuart Mortensen.

Memorial Contributions may be made to Dave's family, Steena Sumner, PO BOX 874, Battle Creek, MI 49016.  A family website with updates on Dave's wife Trudy can be found at https://steenamsumner.wixsite.com/daveandtrudy.

Arrangements are jointly in the care of the DL Miller Funeral Homes of Bangor and the Central Lake Chapel of Mortensen Funeral Homes.  Please sign his online guestbook www.mortensenfuneralhomes.com

To order memorial trees or send flowers to the family in memory of David Keith Sumner, please visit our flower store.