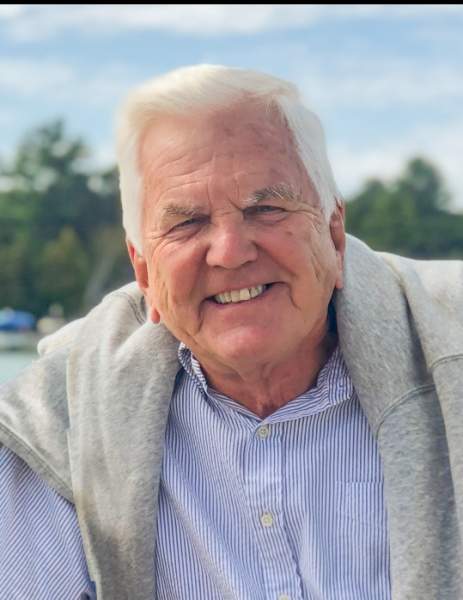 David Lee Johnson met his Heavenly Father on August 7th, 2020 after managing heart disease for 38 years. He passed at home, overlooking Torch Lake with Elaine Johnson, the love of his life, by his side.

Dave was born in 1941 in Keokuk, Iowa to Marleen and Joel Garrett Lee Johnson. He enjoyed childhood summers spent with his brother Dale Johnson along the Mississippi River and visiting with cousins in Minnesota. He graduated from Keokuk High School in 1959 and then St. Olaf College in 1963, where he met his bride. He then completed graduate school at the University of Iowa in 1964.

Dave and Elaine started a family in Park Forest, IL when he worked for the Illinois Institute of Technology and pursued his passion for the theatre by being a part of the Chicago Heights Drama Group, where he directed and acted in several musicals. In 1976 they moved to Middletown, Maryland where Dave sang in the Paul Hill Chorale that performed at the Kennedy Center, and worked for National Institute of Health, and then Technical Resources Incorporated where he remained on the Board of Directors for the rest of his life. He was not only proud of his success and legacy at the company, but also the relationships born at TRI and in Middletown that he cherished forever.

After retiring, Dave and Elaine spent their winters in Port Charlotte, Florida where Dave was a devoted member of the Charlotte Chorale. He also competed in bocce ball tournaments and a bridge league with the Kings Gate Community, went for bike rides, and hosted family members on Spring Break for pool and beach days. If you saw how tan he was all year round, you knew he enjoyed the warm Florida sun.

He spent his summer weekends with Elaine and their four kids, Kurt, Kelly, Kris Ann, and Kathy, on Torch Lake, Michigan where they bonded with lifelong friends over afternoons spent by the water, evenings dancing at Brownwood, and singing around the campfire. He started these family traditions at Torch Lake that have been passed on to three generations so far.

In his life, Dave saw many parts of the world including France, Italy, Ireland, Spain, South Africa, Norway, and of course New York City for his favorite Broadway shows such as, Les Mis, Fiddler on the Rood, Rent, Chorus Line, Tommy, Miss Saigon, and Into the Woods. Dave then directed some of these musicals at Middletown High School. He also had a love for gardening and arranging flowers at his cottage, hosting the traditional December 23rd Johnson Family Holiday Dinner out, baking traditional Norwegian Christmas treats with family, playing fetch with his dogs, catching fireflies, snow skiing at Schuss Mountain, playing “Pounce” and bid euchre, reading James Patterson novels, playing the piano to lead a sing-a-long party, making a strong gin and tonic, honking the boat horn, and making sure the screen door was always shut.

Throughout his life, he was a close follower of Christ through his involvement with St. Olaf College, Zion Lutheran Church, Holy Trinity Lutheran Church, and the First Congregational Church. He was known to express his love for God through his passion for singing with the church choirs that he was a part of and directed throughout his life, where he made many special lifelong friends. He loved performing the Hallelujah Chorus, The Lord’s Prayer, and Once in Royal David City.

He thoroughly enjoyed cheering on his grandkids as they excelled in their passions. From their toddler years through college and beyond, he never missed an opportunity to be present and remind each of them how proud he was to be their grandpa. Dave Johnson was often found beaming with pride saying, “We have 16 grandkids!” and he was the patriarch of a big family that he loved fiercely.

Preceding Dave in death were his parents Marleen and Joel Garrett Lee Johnson.

A private Celebration of a Life will be held on Tuesday, August 11th at 1PM ET.

You can copy and paste the Zoom link below into your browser to view the ceremony from home.

In lieu of flowers please send donations to the Charlotte Chorale:

Or any simple Act of Kindness would be a wonderful way to honor David Lee Johnson.

To order memorial trees or send flowers to the family in memory of David Johnson, please visit our flower store.