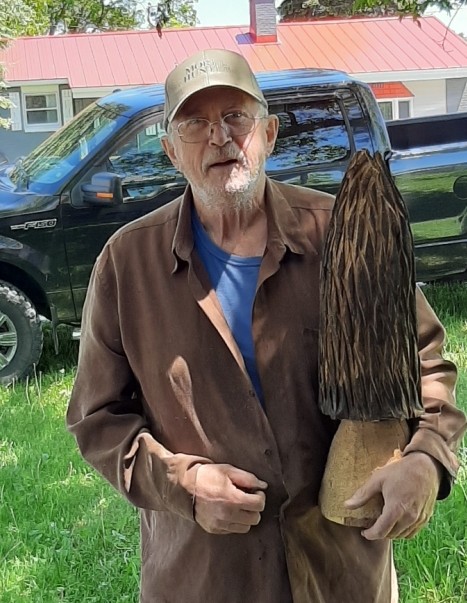 Daniel Jesse Moore, 70, of Alba, courageously accepted a diagnosis of Leukemia in July, and although his body was too weak to win the earthly battle, Dan won the war and was reunited with his Creator, and several predeceased family and friends on November 1, 2020.

Dan was born in Bellaire on what is now known as the Rielly farm, the first son of Jesse and Ruth (DePeel) Moore.

Dan was a factory worker at VIC Metal Products before establishing Moore Builders with his brother, John, building pole barns. He was a renowned chef, and in his younger years owned and operated an Italian restaurant, Morelio’s, in Mancelona. He also worked as a chef and bartender at Bernie’s Club in Mancelona, and the Green Lantern in Alba.

He enjoyed life and had a hand in a variety of projects and activities including construction, deer hunting, fishing, volunteering with Wertz Warriors fundraisers, gardening, and growing flowers.

Hunting the elusive Morel mushroom was one of Dan’s favorite pastimes, and he was locally known as “the” mushroom hunter who could spot a 3mm mushroom a couple of weeks into April. He created his own Morel mushroom soup recipe, a meal that his family and friends looked forward to seasonally.

Family was of utmost importance to Dan.  He welcomed everyone into his home and generous big heart, and he especially loved children. His eyes sparkled and his smile grew wide whenever he held little ones, bouncing them about and bringing them to belly-laughs, as Papas do.

It was no surprise, then, that Dan welcomed his step-children — Kim, Tammy, Kevin, Marcia, Ryan, Joe, Tim, Steve, Amy, Erica and Luke as his own, and their children, as his grandchildren.

Dan’s true love and partner was Vallerie Simon, with whom he shared 16 wonderful years.  Through good health until the end, Val loved Dan unconditionally, providing him with tender care during his illness.

Dan was preceded in death by his parents, Ruth and Jesse, a sister, Kathryn, brother-in-law Ed Potrafke, and son-in-law Patrick Magee.  Cherishing the memories and missing Dan are the love of his life and partner, Vallerie, his siblings Lydia Saddison, John (Alvareta) Moore, Dorothy Potrafke, and Tim (Joanie) Moore, all of Bellaire and Central Lake.

Uncle Danny will be lovingly remembered by his nieces and nephews Patricia, Wendy, Michael, Amanda, Randy, Kathy, Chrissy, Lori, Ed, Brandy, Kayla and Brad and all their families, numerous cousins, aunts and uncles, and the countless friends he made during his journey on earth.

Per Dan’s wishes, cremation has taken place. A celebration of his life will be held at a later date, which will be announced when confirmed.  The family entrusted Mortensen Funeral Homes to handle arrangements.

Memorials may be made to Star Township Fire Department, P.O. Box 141, Alba, Michigan, 49611.  The family wishes to thank the Department for the special attention given to Dan through all his time of need.

To order memorial trees or send flowers to the family in memory of Daniel Moore, please visit our flower store.
Send a Sympathy Card