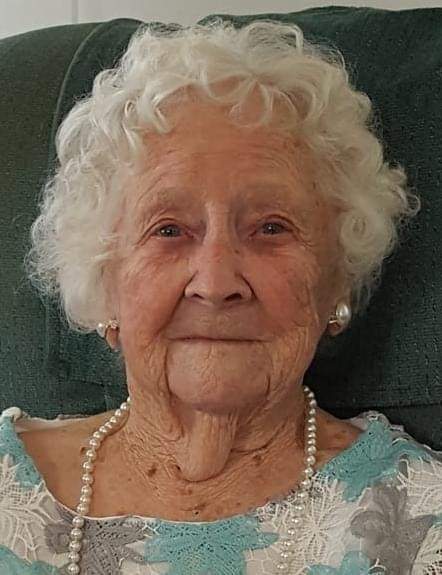 Daisy M. Wilson, of Bellaire, aged 107 yrs, 7 months and 3 days, peacefully slipped into eternity on Wednesday, May 13, 2020, in Dade City, Florida, with her daughter Mariel at her side.

Daisy was born October 10, 1912 in Kearney Township, Antrim County, MI to Lewis J. and Zina M. (Brodrick) Lambert; and was a life-long resident of the area. She attended the rural county Derenzy School and graduated from Bellaire High School in 1931.

On 10 April 1934 she married Earl L. Wilson and in December 1943 they moved into their house on M-88 where they established a home for their four children, and where Daisy remained until only a few years ago. They are remembered by various area people for the successful producing and marketing of their asparagus.

She especially enjoyed working at the Antrim County Soil Conservation District and the Cooperative Extension Service office. Daisy was honored in 1976 for her many years of service. She coordinated the district's tree programs which resulted in many fields and hillsides in the county being covered with conifer trees and wildlife shrubs. During that time she developed a life-long love for bird watching and wildlife.

An avid baseball fan, Daisy rooted for her Detroit Tigers, and kept very detailed statistics for numerous years. To celebrate her 100th year, she was given a standing ovation while attending a pre-season game, and her favorite player, Don Kelly, gave her a prized signed baseball.

She traveled extensively throughout the years, and spent the last 33 years wintering in warm Florida. Her extended family and friends enjoyed many birthday parties, as well as celebrating her successful survivorship with several bouts with cancer.

She was preceded in death by her husband Earl Wilson in 1982, two grandchildren Diane J Kelly and Jennifer Anne Wilson Szeliga, her parents, and seven siblings.

Celebration of Life Services are pending and interment will be in Lakeview Cemetery, Bellaire.

Memorial contributions for this amazing life may be made to the Grass River Natural Area, 6500 Alden Hwy, P.O. Box 231, Bellaire, MI 49615 to support the preservation of Antrim County's wild lands which was so important to this lifelong resident.

To order memorial trees or send flowers to the family in memory of Daisy Wilson, please visit our flower store.