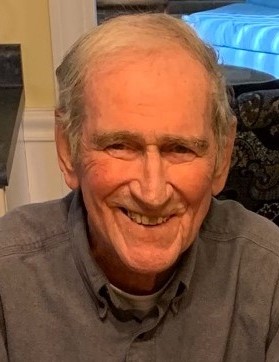 Condit Bailey Drury, 86, of Charlevoix passed away peacefully on April 8, 2021 surrounded by his loving family.  Friends knew him as “Connie.” He was born on February 13, 1935 in Harrodsburg, Kentucky.  The son of Wallace and Catherine (Randolph) Drury.

Connie attended Campbellsville College in Kentucky, played on a baseball scholarship and graduated with a B.S. Degree in Education.  Following college, he had a brief stint playing semi-pro baseball with the Cincinnati Reds organization.  He then went to work at Anaconda Wire and Cable Company in Sycamore, IL, before being drafted into the U.S. Army in 1958.  Connie was stationed in Butzbach, Germany where he was an Armor Intel Specialist 4.  In his free time, he played football on Saturdays with fellow soldier, Elvis Presley, and enjoyed traveling throughout Europe.

Upon returning home from the Army, he met the love of his life, Elaine, in Sycamore, IL and they married on October 7, 1961.  They moved to Charlevoix in 1964 and raised their four children. Connie began his career with the Charlevoix Public School system as a 6th grade math teacher. He then went on to earn his master’s degree from Michigan State University. He continued his career at the Charlevoix Middle School as a guidance counselor before retiring in 1993 after 30 years. In addition to his role as an educator, Connie and his long-time friend, Vince Chew, built residential homes in the summer.  In 1976, Connie was also appointed by the Governor of Michigan to sit on the Charlevoix County Social Services Board where he was instrumental in the growth of Grandvue Medical Care facility.  He was on the Board for sixteen years and served as Chairman of the Board for twelve years.

He was preceded in death by his parents, Wallace and Catherine Drury and sister Donna; and his wife of 57 years, Elaine.

A memorial gathering will be held on June 16, 2021, from 4-7pm at the Charlevoix Historical Train Depot. Memorial contributions can be made to the Charlevoix Public Library, 220 Clinton Street, Charlevoix, MI 49720.

To order memorial trees or send flowers to the family in memory of Condit Drury, please visit our flower store.
Send a Sympathy Card