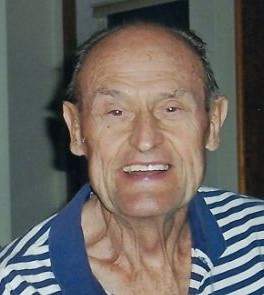 Chuck was raised in Detroit. After his high school years at Detroit Metropolitan High School, in 1943, he joined the Marine Corps as a Sergeant in the Airplane Armorer 911, Pacific Campaign.

Chuck graduated from University of Michigan in 1948. His degree was in psychology but his true love was forestry.  His career was well rounded.  From his days with the State of Michigan, Ford Motor Company, to a long and very successful career with Allied Foods as Vice President of Labor Affairs.

In 1953 he married Barbara Louise Boughner, (now deceased) and had 64 years of an active and exciting life with her.  During their career years, Bobbie and Chuck resided in Bloomfield Hills, MI.  IN 1980 they retired and enjoyed life between Eastport, MI lake living and Key West, FL sunshine.  Their pets, which included so many rescue dogs and cats, were a love of their life.

Chuck always was a strong athlete.  From his high school years as a football star, to tennis, boating, water skiing, and dedicated daily walks in his later years.

His passion was forestry, geology, and his workshop.  Both the Key West and Central Lake libraries received Chuck’s skills to restore their treasured books.  His love for nature as a volunteer with Key West Botanical Gardens was always appreciated.  As a member of the Central Lake Lions Club, he supported many community events.  There are many memories about his Delta Tau Delta Days. Toad Lake, Antrim County, was his time with Mother Nature.

Funeral Services will take place Saturday, May 14th at 2 p.m. at the Central Lake Chapel of Mortensen Funeral Homes, with the family receiving friends from 1 p.m. until the time of service.  Burial with Military Honors will follow in Lakeview Cemetery, Eastport.

To order memorial trees or send flowers to the family in memory of Charles "Chuck" E. Martin , please visit our flower store.