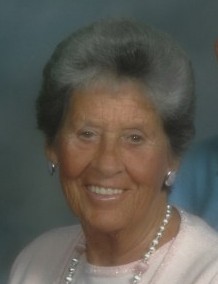 Beulah was a prime example of an excellent wife and mother.  On October 1, 1949, she married Mark Polzin in Birch Run, MI.  They moved to Bellaire in 1960, and it has been home ever since.  They purchased the Bellaire Hardware Store in 1969 and operated it together for 30 years.  Beulah and Mark have attended New Hope Community Church for the past 16 years, and her church family was extremely important to her.  She has gladly served the community of Bellaire in many ways over the years, especially through her god-given affinity to connect with children.

Beulah is survived by her loving husband of 70 years, Mark Polzin; her son Dennis (Barb) Polzin of Williamsburg; her sister Jean Backlund of Bellaire; and Claus Bech Hanson – whom they hosted as a foreign exchange student from Denmark – and his family.

She was preceded in death by her parents, David and Marian Azelton; her daughter, Rhoda Polzin; and her brother, David Azelton.

A memorial service will be held Saturday, August 1, at 1 p.m. at St. Luke Catholic Church with pastors Bob Felton, Tm Manzer and Tom Ash officiating.  Light refreshments will be served following the service.

Memorial donations may be made to the Bellaire Community Food Pantry, 205 E Broad St., Bellaire, MI 49615.

To order memorial trees or send flowers to the family in memory of Beulah Polzin, please visit our flower store.