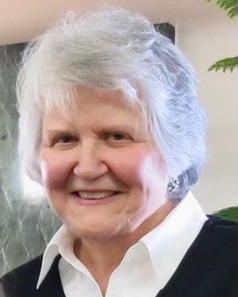 Barbara Jean (Klenk) Holmes, 84, of Charlevoix, MI passed away Wednesday, October 26,  2022 at her residence at American House, Charlevoix. She was born July 6, 1938 in Detroit, MI,  the daughter of John and Pauline (Ott) Klenk. Barbara grew up in Roseville, MI and graduated  from Roseville High School. She then attended Bronson School of Nursing to receive her RN  degree. A few years later, she attended Grace Hospital School of Anesthesia to receive her  CRNA degree. She worked at many different hospitals over the years as a nurse anesthetist  and retired from her last position at Henry Ford Hospital in 1999.

Barbara married Michael Clinton Holmes on July 18, 1968 in Royal Oak, MI. They lived in  Detroit, Grosse Pointe Woods, and Bayfield, WI before settling in Charlevoix in 1977 where they  raised their three children and owned the gift store, The Appletree, until Michael’s retirement in  2006. In later years, she loved working with the Friends of the Library at the Charlevoix Public  Library, cooking and baking, and gardening. Most especially, she enjoyed time with her  grandchildren.

Barbara is survived by her children, Kristin (Salvatore) LaMendola, Ryan (Pamela) Holmes, and  Gregg (Jessica) Holmes, nine grandchildren, her sister, Sharon Malay, and her brother, Hal  Klenk. She was preceded in death by her parents, her husband, and her brother, Bill Klenk.

In lieu of flowers, please consider a memorial donation to the Friends of the Library at the  Charlevoix Public Library.

Arrangements are in the care of Mortensen Funeral Homes in Charlevoix.  Please sign her online guestbook at www.mortensenfuneralhomes.com

To order memorial trees or send flowers to the family in memory of Barbara Holmes, please visit our flower store.