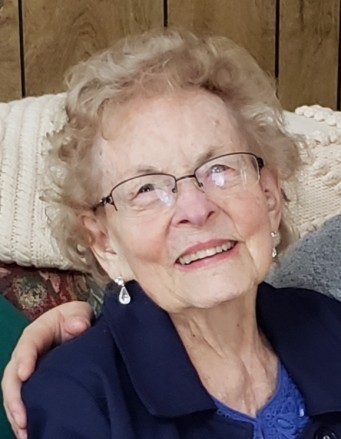 Barbara was born on March 10, 1932 to parents Joseph and Una Anderson in Detroit, MI. She grew up alongside her older brother, Robert Anderson, in Detroit and attended Mackenzie High School. Barbara married her high school sweetheart, Lavern Dowty, on September 6, 1952 and together they had three children; Janis, Paul, and Allen. Barbara was a devoted wife and mother, spending much of her life as a homemaker in Grosse Ile, MI. After their children were grown, Lavern and Barbara relocated to their vacation home in Charlevoix, MI in 1990. Lavern preceded her in death on May 4, 1996.

Barbara was very musically gifted. She sang in numerous church and community choirs throughout her life. She loved to use her gift of song in worship and her Christian faith was very important in her life. Barbara had a compassionate heart for service. She was a dedicated volunteer in numerous church positions, schools as a reading aid, and passionate about supporting our troops. She had a deep love for family pets, even going so far as to bring the cat and dogs on their sailboat trips in Lake Huron. Barbara was an impeccable hostess who loved to throw parties and celebrate with her family and friends. She will be remembered for her cheerful smile and always having a homemade treat to serve anyone who entered her house.

A private graveside ceremony with close family will be held on December 4, 2020 through Mortensen's Funeral Home. A public memorial service will be scheduled at a later date. Donations to honor her life may be made to the Charlevoix Area Humane Society, 614 Beardsley St, Boyne City, MI 49712.

To order memorial trees or send flowers to the family in memory of Barbara Dowty, please visit our flower store.
Send a Sympathy Card