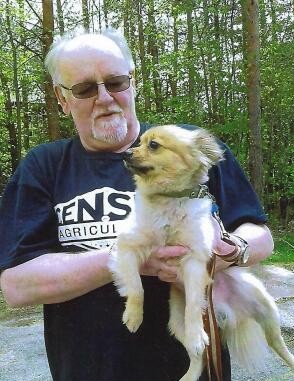 Albert Charles Narro met his Heavenly Father on January 22, 2020 after a
long illness with heart complications. The last year of his life he became
closer to his Heavenly Father and making sure his acceptance with Christ
was real and true. He began counting the many blessings and miracles God
was given him on a daily basis and was so thankful for all he received.
Albert Charles Narro aka Bubba was born in Fremont, Michigan. He was the Son
of Donna Henning Narro and Orville Charles Somerville. He enjoyed farm
life as well as growing up in Central Lake, Michigan. He graduated from
Central Lake Pubic School, Central Lake, Michigan in 1971. Bert was well
known as a Chef in Northern Michigan, California, Florida and Texas. He
was an avid sports fan and had many Sports Themed Parties throughout the
years with an abundance of his many famous dishes. He leaves behind his
Precious Partner in Crime Pomerian, Bubba II. Siblings: Dixon R
Somerville, Owensville, MO; Barbara Somerville, Bellaire MI, Maria
(James) Barr, Manistique, MI; Lois Louden, Alabaster, AL; Betty Henry,
Petoskey, MI; close niece Jacquelline Somerville, Bellaire, MI and many
nieces and nephews.

Those wishing to donate to Albert Charles Narro's funeral expenses may do
so by sending to Dixon R Somerville, 808 North 4th St, Owensville MO
65066. Or any simple Act of Kindness to someone in need to Honor Bert
would be greatly appreciated by Bert and his Family.

To order memorial trees or send flowers to the family in memory of Albert Narro, please visit our flower store.