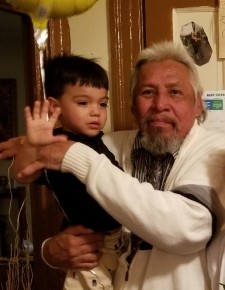 Chief enjoyed sitting on the porch listening to his oldies but goodies music.  He was a devoted Buffalo Bills fan rarely missing a game and football was his favorite season!  Chief was a member of the Grand Traverse Band of Ottawa and Chippewa Indians.

Left to cherish his memory is his significant other, Patricia “Cookie” Raspaldo, his step daughter Amaries Gonzales, his grandchildren Yesley, Nayema, Ezperanza, and best buddy Daymehon whom he was inseparable from.  Also surviving is his brother Ronald (Nicole) Anderson of Sutton’s Bay, 1 niece, 5 nephews, his brother Charles Brooks of Rochester, NY, granddaughter Shavonna, his aunt Audry Anderson of Elk Rapids, and many cousins.  He was preceded in death by his parents, his brother David Anderson, his sister Mary Lynn Anderson and his sister Sherrie Brooks.

Due to COVID a private burial will take place in the Kewadin Indian Mission Cemetery, next to his family.  A public memorial service will be held at a later date.

To order memorial trees or send flowers to the family in memory of Albert Anderson, please visit our flower store.
Send a Sympathy Card